On Tor Cells and Circuits

I’m giving a talk this Wednesday at a local Meetup group on the Tor project, and I wanted to log some of the notes I took as I read the design paper.

Most of it is taken word-for-word, and so I do not claim this to be a work of my own origin. It is intended to be a highly-condensed well of Tor knowledge to which I can frequently refer.

In addition, some of the information may be outdated, since this paper was written in 2004. Buyer beware :)

These notes only cover the technical details outlined in the first part of section 4, as this is what I was most interested in (after having read the entire paper, of course).

Really, though, you should read the paper yourself. Don’t depend only on what I think is important enough to include in these notes!

Onion routers communicate with one another, and with users' OPs, via TLS connections with ephemeral keys. Traffic passes along these connections in fixed-size cells. 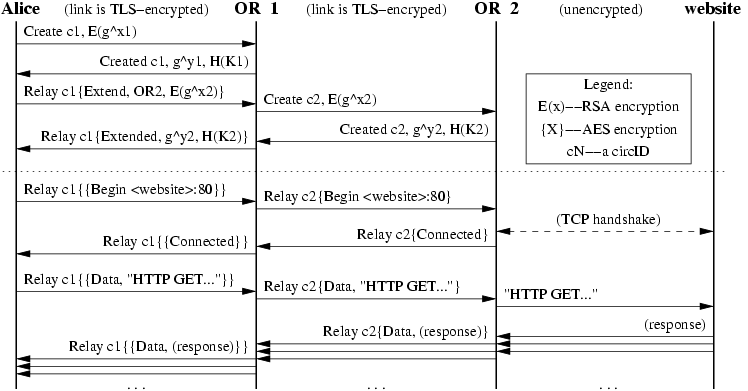 A user’s OP constructs circuits incrementally, negotiating a symmetric key with each OR on the circuit, one hop at a time.

Now that Alice has established a circuit, she now has shared keys with each OR in the circuit and can relays cells:

Incoming cells (to Alice, the OP):

To construct a relay cell addressed to a given OR, Alice assigns the digest, and then iteratively encrypts the cell payload (that is, the relay header and payload) with the symmetric key of each hop up to that OR.

Because the digest is encrypted to a different value at each step, only at the targeted OR will it have a meaningful value.

This leaky pipe circuit topology allows Alice’s streams to exit at different ORs on a single circuit. Alice may choose different exit points because of their exit policies, or to keep the ORs from knowing that two streams originate from the same person.

When an OR later replies to Alice with a relay cell, it encrypts the cell’s relay header and payload with the single key it shares with Alice, and sends the cell back toward Alice along the circuit. Subsequent ORs add further layers of encryption as they relay the cell back to Alice.

To tear down a circuit, Alice sends a destroy control cell to each OR in the circuit:

Similarly, if a node on the circuit goes down, the adjacent node can send a relay truncated cell back to Alice.