GDB is a wonderful tool and a great way to learn about virtual memory and how it’s laid out in a running program.

I’ve recently read this sweet book which explores GDB in some depth, so let’s look at some of its useful commands. Of course, this is not exhaustive.

Let’s take a closer look at the output of info breakpoints, which lists each breakpoint and its attributes.

Breakpoint command lists are a hidden gem of GDB. They allow you to issue a batch of commands each time a specified breakpoint is hit.

The format is the following:

Let’s see some examples. We’ll use the following simple program:

We’ll start by adding a breakpoint at the top of fibonacci(). We’d like to see the value of n every time, but we don’t want to edit the source file and stick a printf in there, nor do we want to print the value every time GDB hits the breakpoint in the recursion.

This is great, but let’s reduce the verbosity by adding the silent command. We’re overwrite the command we just created.

We can optimize this by having GDB automatically continue until the end of the program so we don’t have to do it manually. Simply add the continue command after the body of the command definition:

A watchpoint isn’t assigned to a line of code, but to a variable. Since a variable is just a name for a memory address, it therefore will not have a location assigned to it, as demonstrated in the table of information produce by the info breakpoints command.

GDB will pause its execution every time the variable that is watched changes value.

Here’s an example of GDB pausing execution after setting a watchpoint for the variable p, which is in scope when the slen function in slen.c is pushed onto the stack. After the program is run with the value foobar and the watchpoint is set, next is issued several times, with GDB printing out p’s value at each iteration:

Note that GDB will automatically delete the watchpoint when it goes out of scope, so manually deleting it may be unnecessary, depending.

The last thing I’m going to cover is TUI (text user interface) mode. This is a nice view of the source file that uses the curses library.

Here, you can see that I set a breakpoint on line 8 and then ran the program with an argument of “foobar”. GDB then halted execution at that line and is now waiting for further instructions. 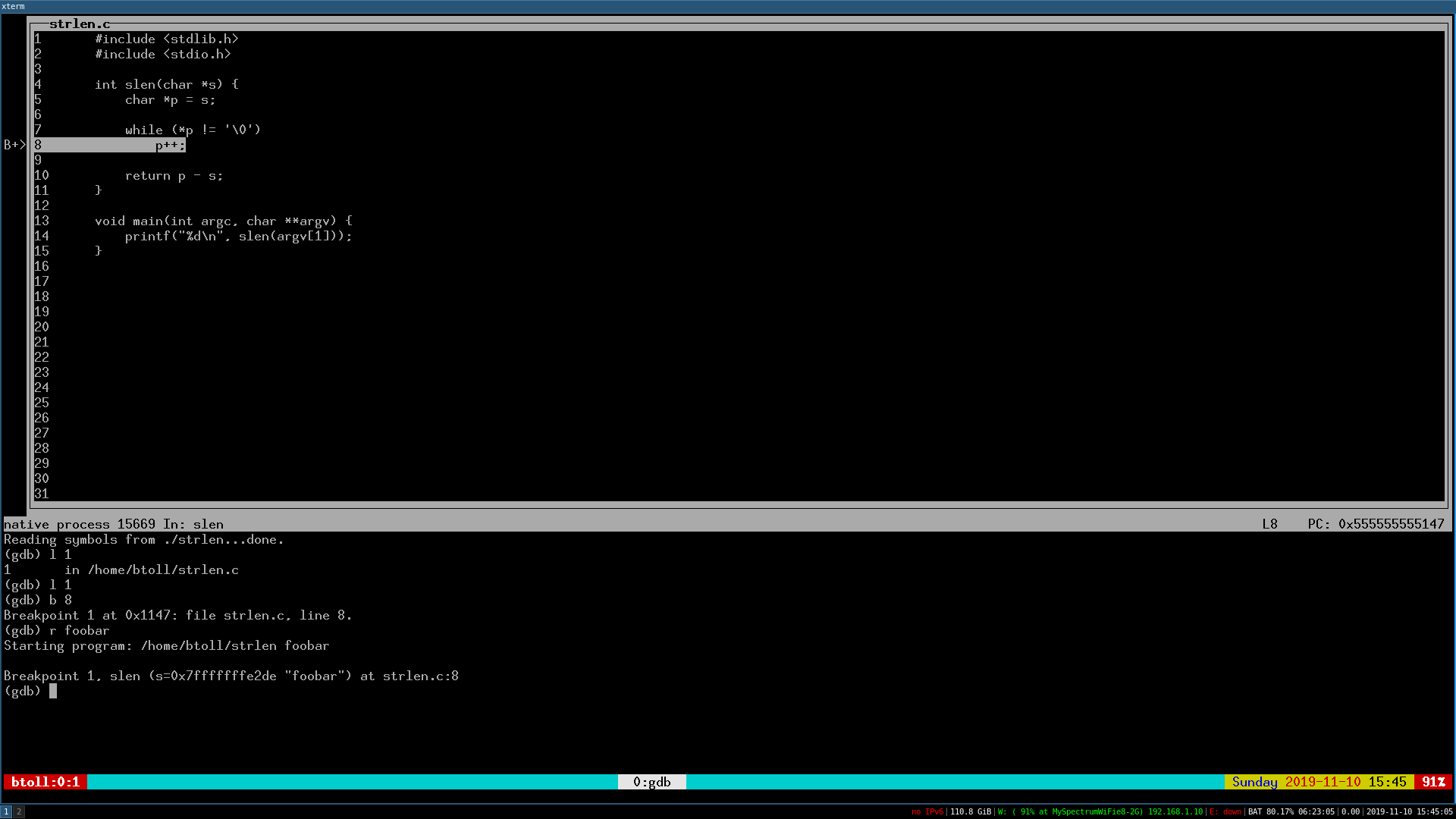 You issue commands as you normally would in the pane below. Note that if you step through the source, the line where the breakpoint was set will be indicated by a B+ symbol on the left (at least on my system), and the currently-executing line will be demarcated by a caret (>) and visually highlighted.

Besides the obvious benefits of seeing the source code of what is being executed, you can use GDB’s list command to jump to another source file of that was compiled into the binary.

For example, let’s move the slen function into its own file:

Now, here’s the result of viewing it in TUI mode after starting GDB with the -tui flag and issuing the command list slen: 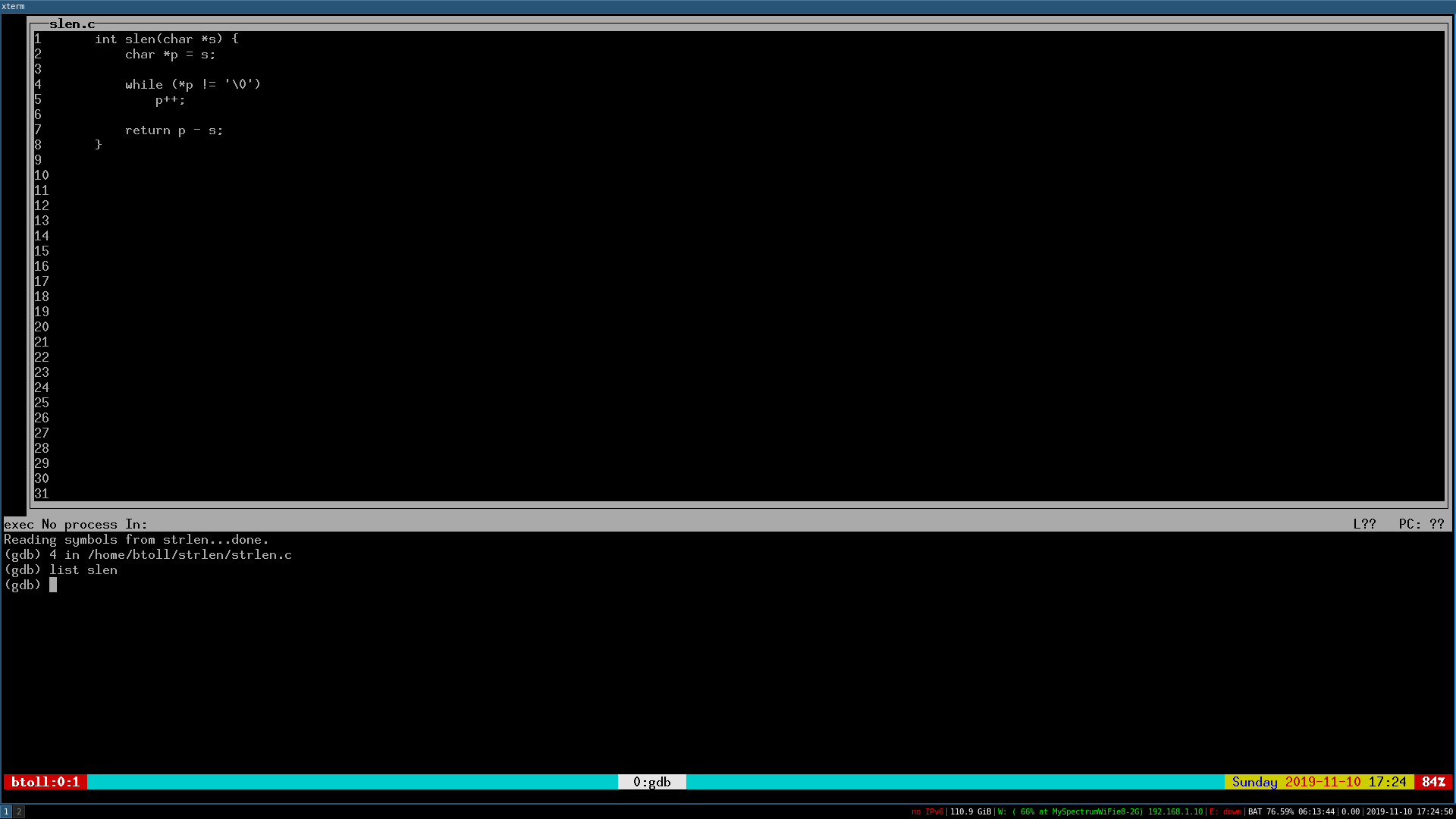 You can see that GDB’s focus when loaded was in the strlen.c source file, but that when the list command was issued to jump to the other file that the header now shows that the focus is now in the slen.c source file. To get back to the previous file, simple invoke list main.

To scroll within the source file, use the up and down arrow keys. To scroll with command history, use CTRL-P and CTRL-N.

Lastly, if you start up GDB without issuing the -tui switch but want to see the view, you can toggle it using the command CTRL-X-A.

For those who’d like more TUI action, here’s a sweet tutorial.